Created 6-Apr-08
Modified 7-Apr-08
Visitors 48
107 photos
In a Dream, a beautiful and harrowing documentary by filmmaker Jeremiah Zagar, had its East Coast premier Friday evening at the Philadelphia International Film Festival. What began as a tribute to the work of his Father, the famed muralist Isaiah Zagar, grew into a profoundly wrenching but ultimately redeeming examination of the relationships between his Father his Mother Julia, his brother Zeke and himself. It's a film that deserves a wide distribution.

Sandy hosted a wonderful post-premier party for the Filmmaker, his crew, his Family, and their many friends. And the next day, we regathered at the Magic Garden on South Street, one of Isaiah's many creations that have transformed Philadelphia into The Center of the Art World.
© John Robert Pankratz 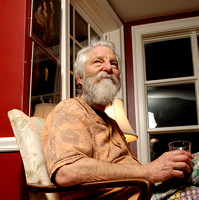