Created 13-Oct-13
Modified 13-Oct-13
Visitors 210
50 photos
Students from the Bard College Conservatory of Music performed Saturday evening at the Women's Club of Reading Center under the auspices of the Friends of Chamber Music of Reading. The program featured Mozart's Piano Quartet in Eflat, Zemlinsky's Trio for Clarinet, Cello, and Piano, and Schubert's immortal Quintet in C major. I've included photos both of the rehearsal and of the reception after a brilliant concert. Many in the audience had heard the Schubert multiple times, but never played with greater commitment! It's a piece that seems to recapitulate a life's worth of experiences, so it's uncanny to see 19- and 20-year-olds play it with such insight. At the same time, the knowledge that talent and intelligence - abetted by a comprehensive apprenticeship - can rediscover this music in each generation reassures us that Schubert will live forever.

Here is Susan Pena's review from The Reading Eagle:

The Friends of Chamber Music of Reading launched its season with a fourth visit from the Bard College Conservatory of Music Ensemble, playing to a packed house Saturday night in the WCR Center for the Arts.

Directed by cellist Robert Martin, who accomplished the remarkable feat of earning degrees from the Curtis Institute in cello performance and from Haverford College in liberal arts simultaneously, the ensemble was made up of students from Bard College Conservatory in New York.

All students are required to complete both a bachelor's degree in music and another one in a different field in five years. So for example, pianist Anna Obbagy, who performed Saturday night, studies piano with Peter Serkin while also studying psychology.

The Mozart was as graceful and elegant as the Zemlinsky was rhapsodic and Brahmsian; Obbagy made a fine transition from lightness and fluidity in the Mozart to the meatier, warmer style of the Zemlinsky.

Overall the Mozart performance was delicate and well-balanced, played with a Shaker-like simplicity and, for the final movement, playfulness, especially between the violin and piano.

The Zemlinsky Trio, while it boasted many lovely moments, was less balanced; the clarinet, tonally beautiful, was occasionally submerged when it should have soared out, and the cello, also well played, disappeared at times.

But the Andante middle movement, with its sinuous lines intertwining, was enchanting.

The second half of the program was devoted to Franz Schubert's magnificent Quintet in C Major, Op. 163, D. 956, performed by Martin, Gundisch, Peng, violinist Jiazhi Wang and cellist Rylan Gajek-Leonard.

Written two months before the composer's untimely death, this Quintet is considered by many (among them Friends manager Thomas B. Souders, M.D.) to be the greatest chamber music work ever written.

Saturday's performance was inspired. From its powerful opening to the final, frenzied notes, the piece was in the hands of two strong, able violinists, two powerful cellists and a marvelous violist.

Their sound was warm and orchestral, with every line a paragon of clarity. Each musician played with profound sensitivity and expression, and the result was an overwhelming experience.

Each movement of this enormous work takes the listener through a world of emotion. Unbearable sorrow leads into wild joy; calm vies with fury and regret. All of human life is encompassed by the Quintet.

The Bard Ensemble's Adagio was otherworldly.

The Scherzo, with its hunting horns and galloping rhythms, was a happy romp, contrasted with its trio, a sonorous dirge.

The finale, combining song and dance, ended the evening with biting accents and savage speed. 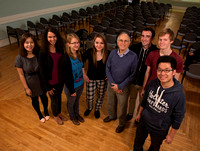