Created 19-Jan-13
Modified 19-Jan-13
Visitors 113
22 photos
The Aeolus Quartet, with home town girl Rachel Kitagawa Shapiro on second violin, made a inspiring appearance last night on the Reading Friends of Chamber Music series, in the acoustically rewarding hall of the WCR Center for the Arts. Here is Susan Pena's review from The Reading Eagle:

It has been 60 years since the Friends of Chamber Music of Reading was founded by Dr. Benjamin F. Souders, and there could be no more appropriate way to start off the year than with the Aeolus Quartet, which played Saturday night in the WCR Center for the Arts.

The quartet's second violinist, Rachel Kitagawa Shapiro, remarked that she grew up hearing concerts presented by the Friends, notably by the Brentano String Quartet. The Wyomissing native went on to make chamber music her career - just one instance of the value this series has for the community.

The house was packed to hear this concert, and Shapiro, along with violinist Nicholas Tavani, violist Gregory Luce and cellist Alan Richardson, played superbly in a varied and deeply satisfying program.

Once the Allegro intervenes like a burst of sunshine, the rest of the piece is what you would expect from Mozart - supple lines, played in this case with a sweet, gentle touch; a gorgeous Andante played tenderly as a lullaby; a sly minuet with a worried trio; and a scurrying Allegro-all given splendid readings.

They played the truly dissonant Alban Berg String Quartet, Op. 3, written in 1910; at that time, even before the riot-inducing Stravinsky "Rite of Spring," it was so cutting-edge it blew away Berg's teacher, Arnold Schoenberg.

But can one really call a piece this impassioned, this evocative and full of heart "dissonant"? Only when compared with what came before. While there are disturbing passages and creepy effects (all of which have by now become commonplace), the piece - especially in this group's hands - is both seductive and profound.

The musicians concluded the concert with two pieces by Jean Sibelius. His String Quartet in D minor ("Intimate Voices"), written only two years before the Berg, couldn't be more different in style. Like the symphonic works for which he is best known, this quartet evokes snowy vistas and birch forests.

From the haunting dialogue between first violin and cello that opened the first movement, through the devilishly quick and light Vivace, the introspective Adagio, the captivating and folkish Allegretto and the fiddling frenzy of the finale, the ensemble played with gusto, big souls and, at the end, absolute glee.

The quartet finished with Sibelius' lovely "Andante Festivo," a chorale in the style of "Finlandia," in memory of Benjamin Souders, whose son, Dr. Thomas B. Souders, has continued and expanded the chamber series since 1971.
© John Robert Pankratz 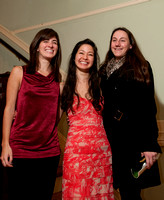